The Mitsubishi car comes with the cheapest product in Iran. In this article, we will review the comprehensive Mirage version and compare it with other models of the Iranian market. 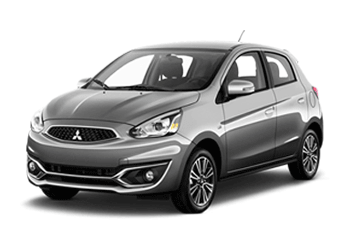 Two categories of people are interested in and the purchaser of small urban mini-cars. The first group is ladies who, given the small size of the body and ease of travel, have been from the past customers of products such as Doo Mataise and Kia Picanto. On the other hand, there are also many drivers who use small hatchback as a second car alongside the chassis or other luxury models. The advantage of using mini hatchbacks in the global market is, in addition to relatively low prices, lower maintenance costs and optimal fuel consumption, while driving and parking in urban traffic is easy. It is also referred to as Small Car Hatchback, City Car or Economic Car.

About a century ago, Mitsubishi Motors Corporation was introduced. The industrial group was known as Japanese shipping giant before turning to the automobile, but it was dubbed the first Japanese automaker with the introduction of the first commercial gasoline brand in 1917. Mitsubishi continued to grow until the 80's and was among the most lucrative car brands in the world, but with the start of the 90's, sales declined and capital scarcity fell. Starting from the 21st century, Japan's oldest automaker fell on a downturn, eventually having to sell all its production lines abroad. Perhaps Nissan is considered to be the savior of Mitsubishi, having bought Lensar and Pajigo from bankruptcy by purchasing 34 percent of its stock. The modern Mitsubishi carriers, including the Chassis Bridge Avtledrer and ASX, which today are present in Iran, look beyond Previous models are presented. This is a sign of the right investment and excellent management of the Renault-Nissan Group at the top of Mitsubishi.

From the past, Mitsubishi cars were in an affordable price class, so that they could be bought for almost all people in the world with a modest income level. However, the presence of a small, low-consumption product in the basket of Japan's oldest automaker seems permanent. Although the name of Mirage is not very well known to the Iranian buyer, it has been seen in the Mitsubishi production line since 1978. The first generation of Mirage, known in many countries of the world, known as Colt Galant, has long been similar to Lancers, and was, in a way, Lancers's cheaper and smaller version. With the passing of years and the popularity of Lancer's world market, Mirage was forgotten, and in other countries it was just another name for Lancer.